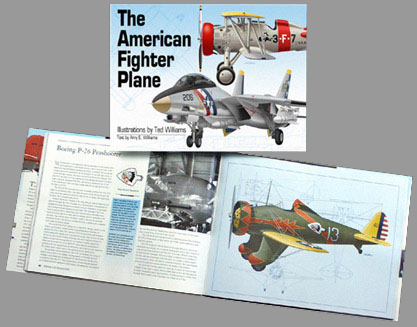 An entertaining and informative volume following the evolution of the American fighter plane from its earliest inception to today's technologically advanced jets. The American Fighter Plane combines artist Ted Williams' illustrations with detailed depictions of some of the most significant fighter planes ever built-from the Thomas Morse MB-3 to the Lockheed F-22 Raptor. The American Fighter Plane is an invaluable resource for aviation enthusiasts and experts alike; it includes detailed text outlining the history of the U.S. fighter plane with stunning illustrations of 40 significant fighter designs. Historically researched and well-written text by Amy E. Williams is supported with many never before published archival photos. Each aircraft has individual specifications with a three-view drawing. Hardcover, 176 pages, 12" x 9"

"Ted brings to his aircraft portraits a rare combination–the soul of an artist and a love of aviation. An artist will capture the grace, the beauty, the smooth aerodynamic line of a fighter plane; Ted does this as well, but he adds a close-up dimension rich in detail."

"While the text portion of this book is excellent, the artwork is outstanding. Each airplane discussed includes a clear and detailed three-view drawing, and a stunning four color artist's rendering The detail of these elements make this a must-have book for those who are looking for great scale documentation."

"Anyone familiar with the artistry of Ted Williams will be thrilled with the full color illustrations that he brings to us in this handsome volume…this beautiful book can easily be seen as the "first" book of a new generation of enthusiasts."

The book is presently out of print. A second printing will be released soon and will again be available from major book stores worldwide. 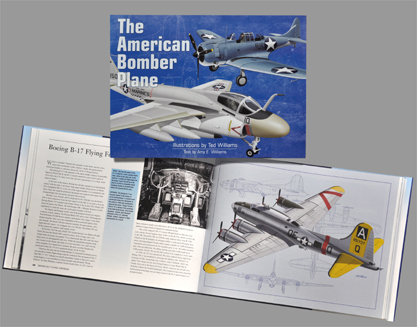 The American Bomber Plane traces the rapid evolution of the bomber plane from flight of fancy to tactical reality. Packed with stunning photographs and illustrations, this book tells the fascinating story of the bomber plane's development as a crucial military weapon virtually since the dawn of America's aviation history.

The American Bomber Plane includes in-depth information about the design and development of forty groundbreaking bomber designs that have made an impact on modern warfare and helped shape history in the process. Featuring the stunning renderings of artist Ted Williams as well as a wealth of full-color and black-and-white archival photos, The American Bomber Plane brings to life some of the most legendary U.S. warbirds. Historically researched and well-written text by Amy E. Williams is supported with many never before published archival photos. Each aircraft has individual specifications with a three-view drawing. Hardcover, 176 pages, 12" x 9"